I sold the Nighthawk. It was my first street bike. I wanted to hang on to it forever, but deep down, I knew it wasn’t going to happen. There isn’t enough room in the garage for a bike that I couldn’t ride.

This was a great bike. Some have called it “The First Sportbike.”

With its bikini fairing, it was like a factory built version of a handmade Cafe Racer. A little more refined, for sure, but the feel was the same. It was an awesome starter bike. Comfortable for long rides. A little sporty without being “too much” for a new rider. Good lines. It was a versatile, dependable motorcycle. 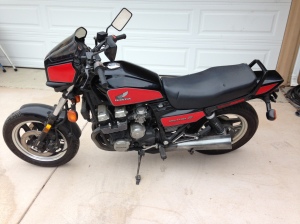 Bone stock and in decent condition for its age.

Unfortunately, this bike — especially the 1985 and 1986 models — had a known issue with 2nd gear in which the gear dogs “ovaled” and started to jump out of gear. It was starting to happen with my bike when I stored it in 2001. I always intended to tear into the engine and fix it. I thought it would be a fun project to work on, and it was something I could do without the pressure of needing a bike right away.

But then we moved to Tennessee and took on a 7-year home renovation and the bike just sat lonely in a dusty corner of the garage. We moved again to Indianapolis in 2011 and I thought, “Now, I’ll get to that Nighthawk project.” But for various reasons, it never happened. That was when I seriously considered moving it along to someone who would take better care of it.

Once we decided to move to California, I knew it was time. Prices would be stronger out there because “motorcycle culture.” (Ironically, Honda US corporate HQ is just a couple of miles from our house.) I threw an ad up on Craigslist and it was gone in a week.

Stupidly, I took the tank off to work on the carbs and spilled gas on the tank decal.

I’ve traded some text messages with the new owner. He’s a med student who just moved for his residency and has large blocks of off time in between his long shifts at the hospital. He’s already got it running again. The title is transferred and he has the bike now legally registered in California.

I hope he enjoys it as much as I did.

One response to “So Long…”